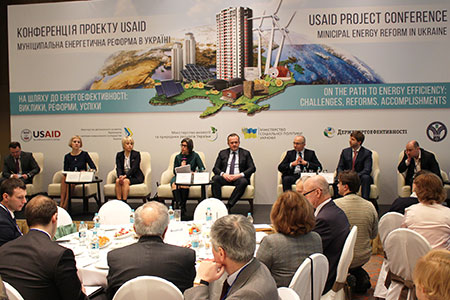 On March 15, 2018, the USAID Municipal Energy Reform Project in Ukraine (USAID Project) hosted the Conference “On the Path to Energy Efficiency: Challenges, Reforms, Accomplishments” that summarized the Project's, as well as its partners and beneficiaries', impressive results of joint work, achieved in the four years of the Project activities in Ukraine.

The Conference included two sections that highlighted the USAID Project achievements on the national and municipal levels, respectively.

The National Level panel discussion was focused on the Project support to the Government of Ukraine in improving the legal framework for implementation of necessary reforms in the municipal energy sector, introduction of the tariff regulation system, social safety net adjustment for its dynamic functioning in the communal sector, as well as enhancement of capacity for development and introduction of low emission development strategies.

The second panel was devoted to the Project cooperation with its partner cities and highlighted best practices in reforming energy and communal services sectors on the municipal level.  Overall, the Project cooperated with 36 municipalities covering 44 percent of urban population. The Project helped the cities develop Sustainable Energy Action Plans and set up the operational aspects of the energy management and energy monitoring systems. In addition, the Project experts and local specialists worked on investment catalogues, feasibility studies, and  business plans that enabled the cities to receive funding for implementation of the numerous energy efficiency and renewable energy projects in the key municipal infrastructure sectors. The special emphasis in cooperation was done on outreach activities to change behaviors of Ukrainians toward energy efficiency (EE) and promote use of alternative energy (AE) resources. It included direct work with consumers during public events, development and dissemination of numerous information materials and public service announcements (PSAs), press events, and media campaigns. As a result of successful work, over 87 % of partner-cities population implemented EE/AE measures in their homes; USD 330 million was mobilized to fund projects of vital importance in advancing municipal energy efficiency.

"ON THE PATH TO ENERGY EFFICIENCY: CHALLENGES, REFORMS, ACCOMPLISHMENTS"