The key drawback of wind energy is lack of sustainability and lack of control over the wind flow. It is very difficult to forecast electricity production by the wind power station (WPS), even for a day ahead. In addition, the wind generators require more or less steady wind speed (about 6 m/s). Another drawback of the wind turbines is their high cost.

POTENTIAL FOR USE IN UKRAINE

The Renewable Energy Institute of the National Academy of Sciences of Ukraine has compiled a map of wind potential for this country. The most attractive regions for use of wind energy are the shores of Black and Azov seas, mountain regions of the Autonomous Republic of Crimea, territory of the Carpathian mountains, Odesa, Kherson and Mykolaiv oblasts. 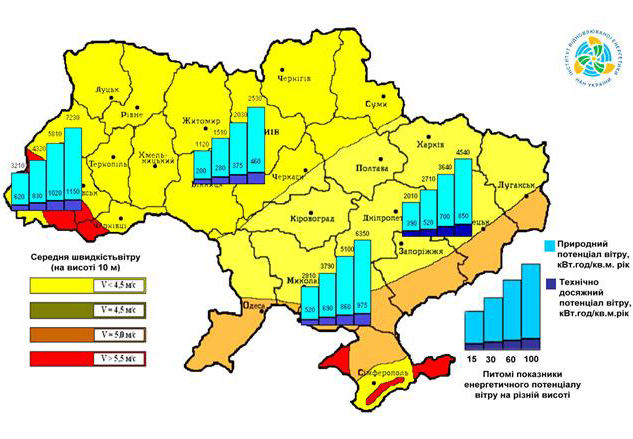 According to data of the Ukrainian Wind Energy Association, increase of the wind energy sector capacities continued in 2013, though with small reduction of the growth rate compared to 2012 indicators.

According to a survey conducted by the Ukrainian Wind Energy Association experts, 95 MW of new wind energy capacities were commissioned in Ukraine in the period from 1 January to 31 December 2013. Thus, as of 31 December 2013, the total installed capacity of wind energy Ukraine was 371MW compared to 276 MW in 2012, which corresponds to the industry rate of growth at a rate of 34%.

In general, by the end of 2013, the total capacity of physically installed wind turbines in Ukraine reached 472.5 MW, of which 101.7 MW are currently in the process of connection to the grid. In addition, construction started on a number of sites located in Luhansk and Kherson regions, as well as in the Autonomous Republic of Crimea.

In 2013, all the wind power stations (WPS) of Ukraine produced more than 630 million kW⋅h of electricity, which is 0.33% of the total electricity production in the country. Due to "green" electricity generated by wind energy, CO₂ emissions into the atmosphere reduced by 512,000 tons.

Reasons for the positive development of the worldwide wind markets certainly include the economic advantages of wind power and its increasing competitiveness relative to other sources of electricity, as well as the pressing need to implement emission free technologies in order to mitigate climate change and air pollution.

The five traditional wind countries – China, USA, Germany, Spain and India – still collectively represent a 72% share of the global wind capacity. In terms of newly added capacity, the share of the Big Five has increased from 57% to 62%.

The Chinese market showed a very strong performance and added 7.1 GW, substantially more than in the preceding years. China reached a total wind capacity of 98 GW in June 2014 and has undoubtedly by now crossed the 100 GW mark. Germany performed strongly as well, adding 1.8 GW within the fi¬rst half year. This new record no doubt comes partly in anticipation of changes in the renewable energy legislation, which may lead to a slow-down of the German market in the coming years.

For the first time, Brazil has entered the top group by becoming the third largest market for new wind turbines, with 1.3 GW of new capacity representing 7% of all new wind turbine sales. With this, Brazil has been able to extend its undisputed leadership in Latin America.

The US market, after its effective collapse in 2013, has shown strong signs of recovery, with a market size of 835 MW, slightly ahead of Canada (723 MW), Australia (699 MW) and the United Kingdom which halved its market size and installed 649 MW in the fi¬rst half of 2014.

The Spanish market, however, has not contributed to the overall growth in 2014, as it has come to a virtual standstill, with only 0.1 MW of new installations in the first half of 2014.

The top ten wind countries show a similar picture in the first half of 2014, although on a slightly higher performance basis. Five countries performed stronger than in 2013: China, USA, Germany, France and Canada. Five countries saw a decreasing market: Spain, UK, Italy, Denmark and, to a lesser degree, India. Spain and Italy saw practically a total standstill, with only 0.1 MW and 30 MW respectively of new capacity installed. Poland is now in the list of top 15 countries by installed capacity while Japan dropped out.

Great Britain and Germany are planning to become the world leaders of wind energy development in the near future, through placement of wind power stations in the sea.

Characteristics of use of wind power stations (WPS) are as follows:

1. Parallel operation with the grid. In this case, electricity produced by a WPS must meet the quality requirements for electricity in the grid. The network, in its turn, should be able to accept power from WPSs (transmission line capacity, availability of the relevant electricity meters etc.) and react timely to change in its quantity.

2. WPS autonomous work. For such WPS work, installation of batteries for electricity accumulation of energy produced by the wind unit in favorable conditions is required. Availability of batteries significantly increases the overall system cost. Therefore, the final decision should be made after technical and economic calculations. Installation of the autonomous WPS (possibly combined with a photo module) is justified for distant objects.

3. Direct conversion of electrical energy into heat. Electric energy produced by WPSs is converted into heat by heating of water with electric heaters. That is, water acts as the heat accumulator. This scheme can be used to preheat water in the hot water supply systems. Its cost is minimal (compared to the first and second versions). WPSs also can be used to cover peak loads of the industrial or other objects.

During the day, energy is accumulated in the batteries, and during peak loads ensures operation of the equipment.

The main disadvantage of wind energy is its instability and lack of control over the wind flow. It is very difficult to forecast electricity production by the wind power station (WPS), even for a day ahead. Also important is the issue of WPS cost-effectiveness.