However, due to construction of the hydroelectricity facilities, large land plots are flooded, valuable species of fish disappear and fertile soils are lost. Therefore, further hydroelectricity sector development requires reduction of environmental risks.

Today, the potential of hydroelectricity sector is used by 60%, mainly due to the Dnieper cascade and other large hydropower plants (HPP).

The remaining potential can be used through installation of the new and renewal of the old facilities at small hydropower plants. According to the existing classification, small hydropower plants (SHPP) include hydropower plants from 1 to 30 MW, mini-HPPs – from 100 to 1000 kW, micro-HPPs – less than 100 kW. As of 2014, Ukraine has about 100 MHPPs with a total installed capacity of about 85 MW. It should be noted that in the 1960s there were about 1,000 micro and mini hydropower plants in Ukraine. Some of them may be recovered.

The main disadvantage of MHPP construction, especially on the mountain rivers, is disturbance of the natural state of the ecological system and it is always necessary to carry out verification of the environmental risks of such plants. 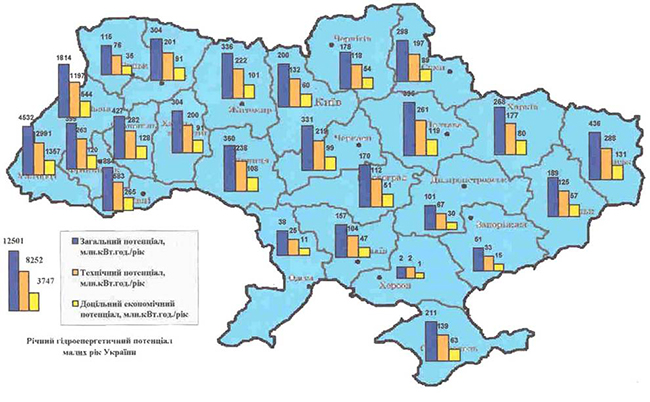 Situation in the European Union

The small-size hydroelectricity sector groups together installations with capacities of up to 10 MW yet has a vital role to play in achieving the targets set by the European Union for 2020. It offers many advantages such as being readily available with a low per kWh cost. It thus contributes to supplying a stable, secure electricity supply. While it has many advantages, the sector has to contend with the implementation of increasingly binding environmental regulations such as the European Water Framework Directive and the protection of Natura 2000listed areas, thus the possibilities for sector expansion have been reduced.

After 2011 scant rainfall hit hydroelectricity production, 2012 saw a return to normality. According to EurObserv'ER, it increased by 9.7% in the European Union, taking output to 45.1TWh, against the previous year's 41.1 TWh.
Net installed capacity rose (by 197.1MW year-on-year) near the 14-GW mark (13 928MW at the end of 2012). Net capacity is defined as the maximum capacity presumed to be exploitable that can be supplied continuously to the grid connection point when the whole installation is operating and must be differentiated from installed capacity.

Italy - the leading European producer, ahead of Germany

Once again Italy topped the European small hydropower producer country league. According to its Ministry of Economic Development, 9.4 TWh of gross output from plants with MW of capacity in 2012 – a 6.4% drop – marks its second consecutive annual contraction since it peaked at about 11 TWh in 2010. Italy still has Europe's biggest generating base in operation with net capacity of 2 905 MW (2 819 MW at the end of 2011), and has a number of incentive systems to encourage small hydropower. Run-of-the-river installations of <l-MW are eligible for a conventional "all-inclusive" (tariffa onnicomprensiva) three-band Feed-in Tariff of € 0.0257/kWh (<20 kW), € 0.0219 kWh (20-500 kW) and € 0.l55/kWh (500-1000 kW). In addition producers can be remunerated directly by GSE (Gestore Servizi Energetici) that manages sales on their account, which saves the producers having to sell their electricity directly into the market. The minimum rate is then € l50/MWh for the first 250 MWh, on a sliding scale dropping to € 95/MWh for 251-500 MWh produced, then € 82/MWh for 501-1000 MWh, and finally € 76.2/MWh for 1001-2000 MWh. Above that output, the market price applies. This system can be combined with the green certificate system in force, but only applies to new plants or plants that have been redeveloped or modernized with new generators. Alternatively, the producers may opt for a market price plus premium arrangement that is particularly attractive to run-of-the-river plants.

In 2012 Germany moved back up into second place with 7.2 TWh of output according to AGEE-Stat, the Ministry of Environment's Working Group on Renewable Energy Statistics, a 22.8% increase and approaching its 2008 level. Net installed capacity was fairly static, contracting by 8 MW to 1780 MW over the year. New plants and redeveloped plants in Germany are only eligible for the new Feed-in Tariff if they comply with the Federal Water Management Act. The FiT ranges from € 0.034-0.127/kWh in line with the plant's capacity and its start-up date. Alternatively, the producers may opt for a market price plus premium arrangement, the latter being subject to monthly review.

As it stands, the small hydropower sector is in line with the NREAP targets, both in terms of installed capacity and output. However its expansion is not assured over the next decade because sector development is increasingly falling foul of the implementation of the Water Framework Directive, which must be transposed into national law before 2015. The EurObserv'ER projections may have to be downsized if the deadlocks continue, yet the industry views that there is considerable potential for development. A very comprehensive roadmap has been drawn up that
makes allowance for the sector's potential as part of the European Stream Map project coordinated by ESHA(European Small Hydro-power Association).The Stream Map report reckons that installed small hydropower capacity could rise to 17.3 GW by 2020 yielding 59.7 TWh of energy, which is higher than the NREAP forecasts. However it points out that the sector's growth by this timeline will be heavily dependent on the ability of industry, public authorities and the decision makers to take appropriate steps to deal with current and future challenges. The public authorities should set up financial or administrative arrangements for new incentive mechanisms. The industry must also persevere with investing in technologies that preserve the ecological continuity of water courses and protect fish populations and should also continue its standardisation efforts across the European Union. Thus much progress remains to be made if the sector is to continue to develop smoothly.