Italy's geothermal capacity is concentrated in two main pro¬duction areas, Larderello, Travale¬-Radicondoli and Monte Amiata. Terna (the Italian power grid manager) claims that net capacity has not changed since 2010, but has stabilized at 728.1 MW, while output has dropped slightly (1.1%) from 5,654 to 5,592 GWh.

In Portugal, geothermal resources have been harnessed to produce electricity in the Azores volcanic archipelago, on Sao Miguel Island, to be exact. According to the DGGE (Directorate General for Energy and Geology), the net operable capacity has also stabilized at 25MW. However Portuguese geothermal production electricity has been badly hit by maintenance operations and dropped 30.5% year-on-year to 146 GWh in 2012.

In France, most of the high-temperature geothermal energy potential is in the overseas territories with two plants at Bouillante, Guadeloupe, with 16 MW of net capacity. A 20-MW extension is planned in the next few years. The DGEC (Directorate General for Energy and Climate) put output from these plants at 51 GWh in 2012. France also has a pilot plant with net capacity of 1.5 MW on the Soultz-sous-Forets site that uses hot dry rock geothermal energy.

In Germany, according to AGEE-Stat (the Ministry of Environment working group on renewable energy statistics), net installed geothermal capacity increased by 4 MW in 2012 because the Insheim plant came on stream. The country now has four geothermal cogeneration plants at Insheim, Landau and Bruchsal in the Rhine Valley and Unterhaching in Bavaria. German geothermal output is thus rising and reached 25 GWh in 2012 (a 31.6% year-on-year increase). Two more plants were commissioned in 2013, at Durrnhaar (5.5 MW) and Kirchstockach (5.5 MW), both in Bavaria, raising nominal electricity capacity to 23.3 MW. Germany intends to significantly increase its geothermal electricity capacity stimulated by an attractive Feed-in Tariff (of € 0.25/kWh over twenty years). A sliding 5% reduction in the tariff will be applied from 2018 onwards, which explains the current popularity for new projects to take up the best tariff before it expires. There are currently about ten projects under construction in Germany for more than 36 MW of capacity, and even more at the development stage. According to the EGEC, German geothermal electricity capacity could rise to 60-70 MW by the end of 2015.

The National Renewable Energy Action Plans forecast that the electrical applications of geothermal energy should almost double their output in 2020, i.e. 10.9 TWh, with 1,613 MW of installed capacity. To achieve this target, not only should the geothermal producer countries expand their existing installed capacities significantly (Italy to 920 MW, Germany to 298 MW, France to 80 MW and Portugal to 75 MW), but new countries should develop their own sectors such as Greece (120 MW), Hungary (57 MW), Spain (50 MW) and Slovakia (4 MW). Most of this development will be achieved by operating binary cycle plants.

Heat production from geothermal sources in in European Union

The capacity of applications linked to direct uses of heat (excluding heat pumps) in the European Union is put at  2,975.7 MW in 2012 for energy recovery in the order of 660 ktoe. These estimates come both from the recent work by sector experts who met at the European Geothermal Congress (EGC 2013) and from the official estimates of the national statistics offices EurObserv'ER favors when the information is available. The statistics demonstrate a sharp increase compared to the data published in the last edition of the State of Renewable Energies, which is explained by better calculation of the geothermal capacity used in balneology, especially in Italy.

The data published during the EGC 2013 has the advantage of breaking down the figures between the three major direct heat application uses, namely heating networks, heat use in agriculture and industry, and balneology and other uses in last place. On the basis of these figures and if we add the data from Slovakia, which is not covered by this study, heating networks are the main use with 42.3% of the thermal capacity ahead of balneology (34.9%) followed by agricultural and industrial uses with 22.9%.

The EurObserv'ER European Union thermal capacity ranking puts Italy in first place for direct uses of heat (excluding heat pumps) with 778.7 MW broken down between balneology with 400 MW, agricultural and industrial uses with 298 MW leaving 80.7 MW for heating networks. Hungary is in second place with 714 MW (breakdown unavailable) which is 60 MW more than in 2011. France comes third with thermal capacity put at 365 MW, with 295 MW in heating networks, 50 MW in balneology and only 20 MW in agriculture and industry.

The ECN summary of National Renewable Energy Action Plans published in November 2011 highlights that energy output from geothermal installations should increase significantly by 2020, with expected heat output at 2,630.7 ktoe with an interim target of 1,348.1 ktoe in 2015. If these targets are to be achieved, they will call for heavy investment in production plants and heating networks. They will also call for incentive policies to give clear preference to geothermal heat over fossil fuel-sourced heat, and thus be much more proactive than the current policies.

POTENTIAL FOR USE IN UKRAINE 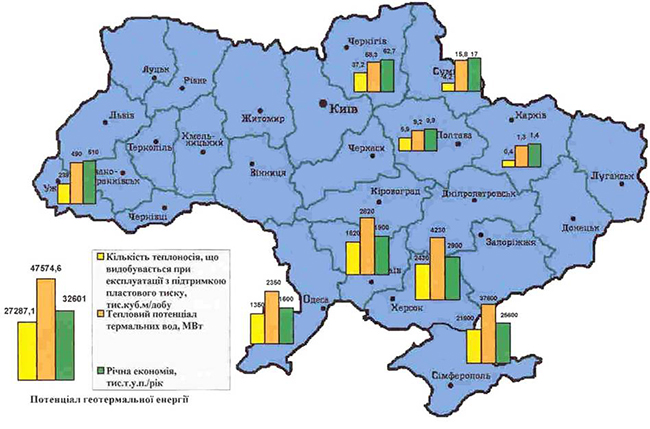