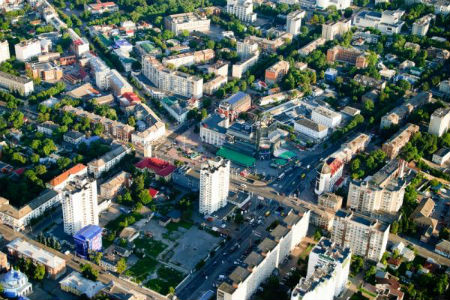 31 objects in the city (which includes 66 buildings) were included in the Program of Energy Efficiency Measures in Public Buildings of Khmelnytskyi developed by the USAID Municipal Energy Reform Project (USAID Project). They were selected as a result of an analysis of 100 public buildings (schools, gymnasiums, kindergartens, hospitals, etc.).

Energy audits were conducted in April-May 2016 for 31 buildings. The audits included determining the current condition of the building envelopes, internal networks, and electric equipment; conducting an energy calculation and compiling energy balances; suggesting energy efficiency measures and calculating the efficiency of their implementation, etc.

The energy efficiency measures were developed separately for each object. The main objective of the implementation is the saving of energy resources and ensuring the proper normative conditions in the premises.

Three packages of such measures were identified.

Package of measures # 1 (maximal) includes the full list of the EE measures for the buildings: modernizing the building networks, reconstructing the heating systems, thermal modernization of the building envelope, modernization of the ventilation and lighting system. It would conserve the most  energy resources - almost 22,000 MWh (62.4%). It would also reduce expenses for their purchase and reduce greenhouse gas emissions the most (6,261 t/year). Cost of package – almost € 7.5 million.

Package of measures # 2 (optimal) contains energy efficiency measures (incomplete thermal modernization of the building envelope, partial modernization of the ventilation systems, comprehensive reconstruction of the heating and lighting systems) which require less capital expenses for implementation. It would bring savings of over 16,000 MWh of energy resources (46%), including for heating of the buildings, and reducingf СО2 emissions by 4,686 t/year. Cost of package – almost € 5 million.

Package of measures # 3 (minimal) includes rh comprehensive modernization of the heating system, modernization of the lighting system and partially – of the ventilation system. It has the highest efficiency in view of the payback on capital investments but gives the smallest amount of reduction in energy resources consumption (7 th. MWh) and greenhouse gas emissions (2,126 t/year).

It is expected that the measures will be financedby taking out a loan from the European Investment Bank (EIB).