As stated above, the Catalog of Investment Projects was developed as an annex to the Rivne SEAP. It contains data on 37 projects in the following municipal sectors:

To assess investment attractiveness of the projects, different scenarios of price changes for energy and energy services were considered, also the required amounts of investments and economic performance indicators for each project proposal were indicated. For financing of the Sustainable Energy Action Plan of the city, it is proposed to involve several financial sources (funds of the international banking institutions, communal utilities, private investors, etc.). The Chart of distribution of financing by sectors is presented below. Total amount of investment projects financing for the period of 2015-2025 is over UAH 2.2 billion. 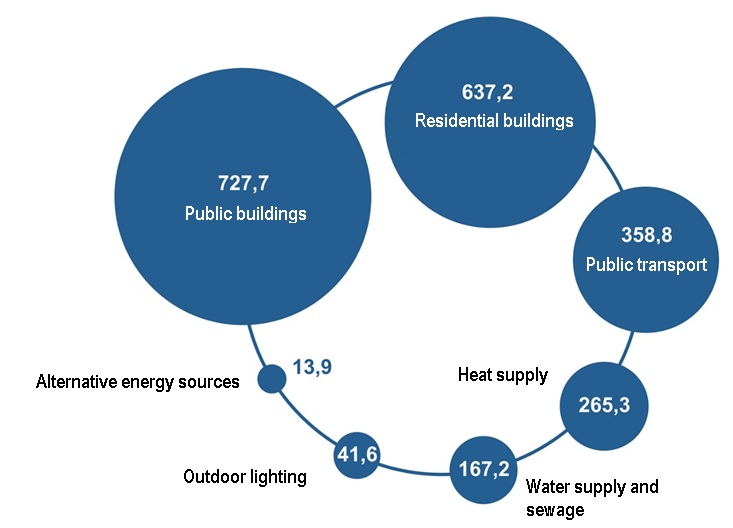 District heating services are provided in the city by two utilities: Rivneteploenergo LLC (98.6% of produced heat energy) and PJSC “ESCO-RIVNE” (1.4%). In total, the balance sheets of the heating utilitiesinclude: one heat power station (HPS), 40 boiler houses (19 of which are gas-fired and one operates on an alternative fuel – wood chips), 76 central heat substations (CHS), 48 IHSs (individual heat substations), one cogeneration unit in the boiler house, 203.2 km of heating networks (in double-pipe measurement). Total design capacity of boiler houses of these utilities is 753.4 Gcal/h, connected capacity – 311.1 Gcal/h. The following main problems in the sector include asignificant under-capacity of the district heating system (59%), which leads to increased heat energy losses in the networks; almost 75% of boiler house equipment has been in operation for more than 15 years– it is physically and technologically outdated; the level of heating networks depreciation is over 70%; thelow level of the equipment of the buildings with IHSs and, accordingly, low quality of the services provided.

If all of the measures in the heat generation and transportation sector are implemented, it would reduce CO2 emissions by 32,917 t/year or 6.18% of the baseline. Energy resources consumption would fall by 16,459 th. m3 of natural gas and 3,658 MWh of electricity.

The city has established cooperation with EIB and expressed its intention to take part in the “Ukraine Municipal Infrastructure Development Program” project. Plans include implementing the “Modernization of Heat Supply Objects in Western Part of Rivne” investment project, which will implement a set of measures aimed at reducing heat energy losses in the mains of the municipal heating networks, as well as reduce heat energy consumption in residential buildings while reducing the communal bills of the populace.

If all measures in the water supply and sewage sector are implemented, it would reduce CO2 emissions by 5,763 t/year or 1.08% of the baseline. Total energy resources consumption would fall by 4,968 MWh of electricity a year.

On 16 June 2016, the deputies of the Rivne City Council supported the participation of the Rivne City Council Executive Committee in the “Ukraine Municipal Infrastructure Development Program” implemented with EIB €5.5 million loan for financing of subproject “Introduction of Energy Saving in Facilities and Buildings in Communal Ownership of Rivne” project. It provides for implementing measures to improve energy efficiency in 30-40 secondary schools, sports schools, music schools, medical institutions, and kindergartens in the city.

Rivne has 300.5 km of automobile roads. There are eight automobile bridges and four crossovers in the city. Public passenger transportation in the city is performed by trolleybuses, buses and private buses (mostly small capacity passenger buses) operating as fixed-route taxies. Bus transportation is conducted by different kinds of business entities: 11 of these are private companies and 93 are private carriers. 35 bus routes are operated by five buses and 350 buses operating as fixed-route taxies. The average operating life of the bus rolling stock is 13 years. There are 728.6 km of bus lines. Municipal passenger transportation services via electric transport are provided by CU Rivneelectroavtotrans. Up to 66 trolleybuses work on 10 routes. There are 60.8 km of trolleybus lines and 8 traction substations. The average age of the trolleybuses exceeds 26 years. The amount of electricity consumed by municipal transport in 2014 was 5,516 MWh, diesel fuel – 5,715 th.

If all measures in the transport sector are implemented, it would reduce CO2 emissions by 8,951 t/year or 1.68% of the baseline. Total energy resources consumption would fall by 2,978 MWh of electricity a year.

The outdoor lighting networks of the city are on the balance sheet of CU Misksvitlo. As of 2015, the utility operated 260.1 km of cable and air outdoor lighting networks, including 238.42 km of air lines and 21.68 km of cable networks. In 2010-2014, the number of lighting fixtures increased from 8,711 to 9,559 units (by 10%). The municipal lighting system uses over 30 types of light sources, but the most used are arc sodium tubing lamps (DNaT) which, despite their high energy efficiency, require frequent servicing and have a short lifecycle. The municipal outdoor lighting is controlled from the central dispatch point of the Kaskad automated system via control stations and cabinets. Misksvitlo has started implementing remote control for outdoor lighting through GSM-network radio channels, with computer data processing. To identify the amount of electricity consumed for the needs of outdoor lighting, 135 devices of metering differentiated by time are used. Most of the electricity is consumed during the night tariff time(on average, 90% of total consumption, which in 2014 was 3,436 MWh).

If all measures in the outdoor lighting sector are implemented, it would reduce CO2 emissions by 1,497 t/year or 0.28% of the baseline. Total annual energy resources consumption would fall by 1,290 MWh of electricity a year.

There are152 public buildings subordinated to the city (76 educational establishments, 8 health protection institutions, cultural and social protection institutions) with a total heated space of 381,8 m2. The most significant heat energy consumers are municipal educational establishments (71% of total consumption) and health protection institutions (17% of total consumption). The conditional heat energy consumption in the buildings is 175 kWh/m2 a year in average, which is significantly higher than the European norms (15-45 kWh/m2) and normative values (45-70 kWh/m2) according to DBN B.2.6-31:2006 “Heat Insulation of Buildings” with amendment # 1. Also, the norms on indoor microclimate are not observed in the premises, which affects the high energy consumption by the public buildings in the city. In 2014, the public buildings sector consumed the following amounts of energy resources: 223,600 m3 of natural gas, 30,787.3 Gcal of heat energy and 7,413 MWh of electricity.

Implementing the project proposals in the sector of public buildings will reduce CO2 emissions into the atmosphere by 13,425 t/year or 2.52% of the baseline. Total energy resources consumption will fall by 5,436 m3 of natural gas and 1,145 MWh of electricity a year.

On 23 June 2016,the deputies of the Rivne City Council supported the decision to take out a NEFCO loan for financing the “Introduction of Energy Saving in Three Buildings and of Energy Management System in Public Buildings of Rivne”investment project. The loan amount is over UAH 8.2 million.

The total funding envisaged for the proposed six projects in this sector is UAH 637.2 mln., average payback period – 5.8 years.

Residential housing stock of the city consists of 1,363 residential buildings. The total space of multi-apartment buildings is 4,638.4 th. m2, and 74% of buildings have six floors or less. The residential buildings are managed by five housing and communal companies of different ownership forms. Most of the buildings belong to the first mass construction series of the 1950-1960s. They are technologically obsolete, have a number of constructive deficiencies and do not comply with modern comfort norms. Energy consumption to ensure comfortable conditions in such buildings exceeds modern norms (15-45 kWh/m2 according to the European norms and 45-70 kWh/m2 according to DBN B.2.6-31:2006 “Heat Insulation of Buildings” with amendment # 1) by 2.5-3 times, and cause unreasonably high operating expenses for providing heating and water supply services. Only 8% of existing residential stock was constructed after 1991. There are 230 residential buildings equipped with heat energy meters. Per-resident space is 18 m2. In 2014, the residential buildings sector consumed the following amounts of energy resources: 51,247.2th. m3of natural gas, 414.9 Gcal of heat energy and 140.5 th. MWh of electricity.

Implementing the project proposals in the residential building sector on the stage of heat consumption will decrease general CO2 emissions by 32,528 t/year or 6.16% of the baseline. Total annual energy resources consumption would fall by 8,549 th. m3 of natural gas and 1,665 MWh of electricity.

The total funding envisaged for the proposed 3 projects in this sector is UAH 13.9 mln., average payback period – 0.9 years.

As of 2015, the whole amount of solid waste created in the city is removed and utilized at the municipal landfill (in average – 1,080 th. m3a year). The average space of the landfill started in 1959 is 21.15 ha. Since 2013, the first in Ukraine waste incineration plant was functioning in the city, its capacity is 120,000 t/year. The company produces fuel from solid domestic waste according to the “fluff” technology (lax secondary fuel), which allowed the city to process up to 40% of municipal waste. The plant is not functioning now due to a lack of legislative regulation. Separate waste collection was introduced in the city.

The Catalog of Investment Projects in this sector includes: constructing a cogeneration plant for combined electricity and heat energy production with the utilization of landfill gas; creating an automobile gas filling compressor station on biogas as fuel for the trucks servicing the solid waste landfill; resumption of work of the waste incineration plant and production of secondary fuel.

Implementing the project proposals in the sector of alternative energy sources will reduce CO2 emissions into the atmosphere by 6,184 t/year or 1.16% of the baseline. Total energy resources consumption will fall by 861,000 m3 of natural gas and 3,908 MWh of electricity a year.