Low Emission Development: What US Experience Will Help Change in Ukraine 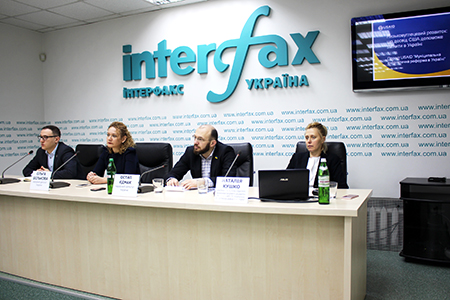 The USAID Municipal Energy Reform in Ukraine Project (USAID Project) and Deputies of the Verkhovna Rada of Ukraine held a briefing on 3 February 2017 regarding the MPs’ study tour to the United States. The tour was arranged to exchange experience on the transition to low emission economic development. The event presented the U.S. experience in developing and introducing green energy and how to practically implement the American experience in Ukraine.

Low emission development issues must become one of the key levers of economic growth in Ukraine. The Ukrainian scientists, government officials, MPs, representatives of civil society who are engaged in the formation and implementation of the state policy in this area lack the experience and understanding of all aspects of the transition to a low emission economy. As a result, Ukrainian policy makers have often opted for energy intensive and carbon intensive economic development scenarios which cause negative implications for sustainable development, incentives and clean energy development, and generally do not promote the energy security of Ukraine.

The study tour, organized by USAID, allowed the representatives of the Ukrainian Government, the Verkhovna Rada of Ukraine, and scientists to improve their knowledge of the goals and processes behind the transition to low emission development, to gain experience in developing and implementing better policies supporting the weighted transition to an economy with low greenhouse gas emissions in the long-term perspective. During the study tour, the participants attended formal meetings with the U.S. Congress, U.S. Department of State, U.S. Department of Energy, USAID, representatives of the New York State Energy Research and Development Authority, Connecticut and New York Green Banks, Philadelphia mayor’s office and the Governor of Connecticut, and academics at two core Washington D.C.-based universities – Johns Hopkins and George Washington University.

The following issues were discussed at the briefing: how the results of this study tour to the U.S. will promote the strengthening of political support for and the development of the legislative framework on the transition to a low emission economy; the introduction of procedures and mechanisms promoting access to energy efficient and energy saving technologies, the transition to renewable energy for implementing a low emission economic development scenario in Ukraine.

The USAID Municipal Energy Reform Project in Ukraine, implemented on the national level and in 34 Ukrainian cities, was created to assist the municipalities and the Government in overcoming the energy crisis with the help of a variety of tools and measures. They all are aimed at reducing energy consumption, reducing expenses for energy carriers, reducing greenhouse gas emissions through the introduction of energy saving technologies and the use of alternative energy sources in residential buildings. More details on the USAID Project and its activities in the partner cities can be found on our web site.