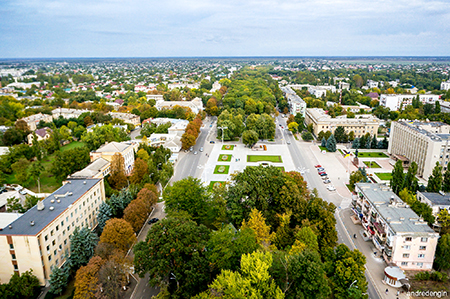 Izmail City Council deputies adopted the Sustainable Energy and Climate Action Plan through 2030 (SECAP), on 31 March 2017. The SECAP was developed at a record pace of 3 months with the support of the USAID Municipal Energy Reform Project in Ukraine (USAID Project). The Memorandum of Understanding between the USAID Project and Izmail City Council was signed on 30 September 2016.

SECAP is a strategic document developed by the cities which join the Covenant of Mayors, a large-scale initiative of the European Commission on sustainable city development. Its signatories commit to reducing their СО2 emission by at least 30% by 2030, thus promoting the development of an environmentally oriented economy and improving the quality of life of their citizens. Izmail officially supported the Covenant of Mayors on 28 April 2016.

In order to identify the baseline level of СО2 emission, Izmail has applied the baseline year selection method. According to this method, a year is selected as being the most representative from the viewpoint of energy consumption. In this case, 2015 was selected, as it was also the most “energy consuming” year for the city. The main sectors generating СО2 emissions in the city were: residential buildings sector ¬– 54% of total emission amount; transport infrastructure – 33%, and the heat supply sector – 8%. Taking this into account, the strategic mission of Izmail SECAP through 2030 is to reduce СО2 emissions by at least 30% (71.3 th. t/year) of the 2015 baseline emission level (237.7 th. t/year). Achieving this goal is possible by improving the energy, social, economic and environmental safety of the city by reducing fossil fuels consumption and through their replacement with renewable energy sources, with the proper quality of housing and communal services, and by improving the quality of life for the city community.

To achieve the SECAP strategic goals and implement energy efficiency measures and projects on use of the renewable energy sources (RES), the sectors were selected based on the common understanding of all local partners: executive power bodies, enterprises, institutions, NGOs and city residents.

Altogether, 73 measures and investment projects on energy efficiency are suggested for a total amount of UAH 1,718.7 mln. Their implementation will allow the city to reduce the consumption of energy resources by 196,800 MWh/year.

Izmail SECAP for 2017-2030 also contains a separate outreach and information campaign program aimed at changing the energy efficiency behavior of the residents and the employees of the public institutions, enterprises and organizations (through increased awareness, new knowledge and skills).

It is expected that the total accumulated economic effect from SECAP implementation will be UAH 1,695 mln by 2030 (the city residents will save about UAH 838 mln by 2030).

Izmail SECAP is unique for Ukraine. For the first time, the USAID Project assessed the climate threats according to the Covenant of Mayors methodology. The results of this assessment indicated that the vulnerability of the city to possible negative impacts is relatively high. To adapt the city to climate change, a set of relevant recommendations was developed. These include organizational and management measures; architectural and planning solutions and restrictions; engineering and technical measures, plans and projects for protection of the city territory, increased energy efficiency in the operation of leading companies etc. (SECAP projects), and conducting a public outreach campaign.