An Official Ceremony of Submitting Reports on Energy Audits 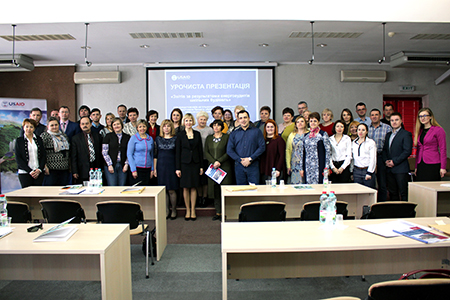 An official ceremony of submitting reports on energy audits of the schools-winners of the contest on reduction of power consumption conducted by the USAID Municipal Energy Reform Project in Ukraine among 78 schools from 16 partner cities (five from each city) took place in Kyiv on April 26. In the course of competition, the students together with the teachers were able to save over 41 th. kWh of electricity, which is UAH 78,901 in cash equivalent. The highest success was achieved by the schools from Kamianets-Podilskyi (33.5%) and Khmelnytskyi (20.5%).

Under the terms of the competition, the jury selected one winner from each city. Following the contest, 16 Ukrainian schools that showed the highest energy savings results received from the USAID Project the certificates for audits of the school heating, water supply, sewage and power supply systems during 2017 heating season. Based on results of these energy audits, the USAID Project experts developed for the schools three options of the most effective energy efficiency measures, calculated amount of required investments for their implementation, as well as potential payback period.

Diana Korsakaite, Chief of Party of the USAID Project, said at the ceremony opening: "Such competitions allow not only to explain to children the importance of saving energy, but also to form their economical attitude to the utility services in general. In the future, this will ensure strengthening of Ukraine’s energy independence that we all strive for. If all the schools-winners of our contest implement the optimal packages of energy efficiency measures proposed by the USAID project experts, together they will be able to save annually up to 7.8 million kWh or up to UAH 8.4 million".

Honorary guests of the event – the representatives of the Ministry of Regional Development, Construction and Housing and Communal Services, the State Agency for Energy Efficiency and Energy Saving and the Ministry of Education and Science of Ukraine – stressed that upgrading and modernization of the Ukrainian schools in order to reduce their energy consumption is an important goal for the school principals, education departments and city councils. Addressing the issue of efficient energy consumption is one of the primary steps towards implementing the national energy saving strategy.
In addition to the reports on energy audit results, the USAID Project experts presented to the participants a review of possible sources and mechanisms of financing for implementation of the proposed energy efficiency measures.