Media Trainings in Odesa and Zaporizhzhia 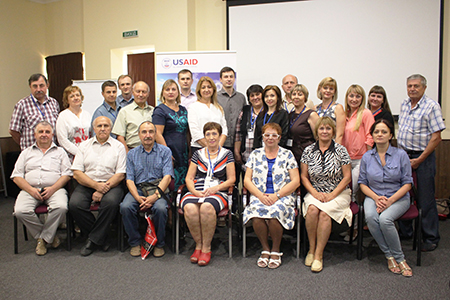 Two more trainings for the journalists “Key Information on Energy Efficiency in Media” were conducted by the team of the USAID Municipal Energy Reform Project in Ukraine (USAID Project). This time, the training in Odesa on September 7-8 was attended by over twenty media representatives from Kherson, Odesa, and Vinnytsia oblasts, and the next week – by thirty more journalists from Zaporizhzhia city and oblast.

These two-day trainings had very busy agenda – interactive presentations by the experts, press tours, master class and game “We Are Energy Efficient” developed by the team of the USAID Project experts. Before the beginning of the training, every journalist received a card with description of his/her character and became, together with the colleagues, a co-owner of one of three buildings with the problems typical for Ukraine. “Editorial task” in our game was to resolve these problems, and to write the information materials with practical and motivating tips for their readers.

For successful fulfillment of this task, the training participants first received an intensive theoretical training. Together with the USAID Project experts, they studies the modern energy saving technologies, peculiarities of modern construction, importance of passive buildings, myths about the housing and communal  services sector and the homeowners associations. They also learnt about the modern technologies of presenting information on different media platforms, use of correct terminology in media materials, busted the most popular myths about establishment and functioning of the homeowners associations, tariff policy and subsidies.

This was followed by a practical part – at the end of Day 1, the journalists were able to participate in the topical press tours. In Odesa, they visited two local homeowners associations “Vchytel-2” and “Park Peremohy”, the most active among local participants of the State “Warm Loans” Program in support of energy saving. In 2.5 years of its existence, “Vchytel-2” homeowners association was able to receive the loans three times, and to implement a number of energy efficiency measures. The building-level heat meter and energy saving windows and entrance doors were installed, electrical wiring was replaced, energy saving lamps and motion sensors at the staircases were installed. In “Park Peremohy” homeowners association, the journalists saw and were told about advantages of installation of an individual heat substation in multi-apartment buildings. Already in the first heating season with this IHS, the building residents saved 20% of heat, and reduced their communal bills accordingly.

In Zaporizhzhia, a master class “How to Insulate a Building Correctly” was organized for the journalists, and the participants learnt here who should conduct the works on heat insulation of the building, how to choose correctly the building materials for this, what should be the sequence of the relevant measures. The journalists were able to apply this knowledge in practice right away – together with the insulation specialists, they were able to insulate a small wall. Afterwards, the team of the training participants visited two smallest homeowners associations in Zaporizhzhia – “Respublikanska 98” (14 apartments) and “Respublikanska 94” (12 apartments). Having joined their efforts, the co-owners took part in the State “Warm Loans” Program and received over UAH 250,000 for implementation of the energy efficiency measures. This money was spent by “Respublikanska 98”homeowners association to install an IHS, and by “Respublikanska 94” homeowners association – to insulate the building façade. In addition, the homeowners associationss allocated part of the money for installation of the energy saving windows in common areas. As a result, the heating bills halved compared to the neighboring buildings.

The second training day was devoted to work in the mini-editorial boards. Using information received during the training and press tours, the teams had to fulfill their “editorial task” which they received the day before. It was – to write a motivating and creative article that would show the Ukrainians solutions for resolving the problems typical for the multi-apartment buildings. Authors of the best works received the souvenirs from the USAID Project. The final training will take place in the near future in Kharkiv.